Amelia: What a dark night!

Adela:  You can't see two steps ahead of you.

Martirio: A good night for thieves, for someone who needs a hiding-place.

Adela: The stallion was in the middle of the corral - so white! Twice as big, completely filling the darkness!

Amelia: It's true. It was frightening! It was like an apparition.

Adela: There are stars in the sky as big as fists!

Martirio: Our sister was staring so hard at them; she almost broke her neck.

Adela: That's how you are.

Bernarda: She has her way, and you have yours.

Adela: Are you going to bed now?

Adela: Mother, when there's a shooting star or a flash of lightning, why do we say:

'Blessed Saint Barbara, why are you writing, up so high, With holy water in the sky?'

Bernarda: In the old days they knew many things that we have forgotten. 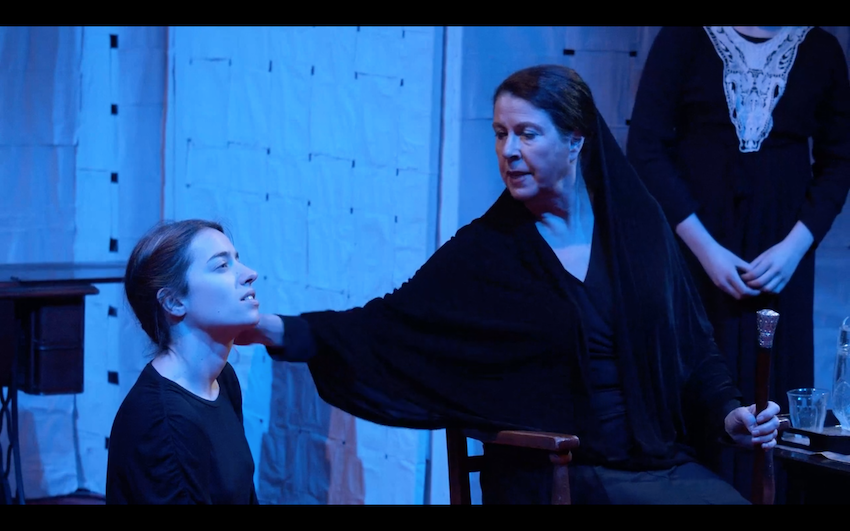 Amelia: I close my eyes, so I won't see them!

Adela: Not me. I like to see things blazing through the sky, after being motionless year after year.

Martirio: But these things have nothing to do with us.

Bernarda: And it's best not to think about them.

Adela: What a beautiful night! I'd like to stay up very late so I could enjoy the cool air from the fields.

Bernarda: But we have to go to bed. Magdalena!

Amelia: She dozed off.

Magdalena (annoyed): Leave me in peace.

Magdalena (getting up peevishly): You don't leave a person alone!

Bernarda: You go, too.

Bernarda: He went on a trip.

Adela:  See you in the morning.

(She leaves. Martirio drinks some water and exits slowly, looking towards the door to the corral.) 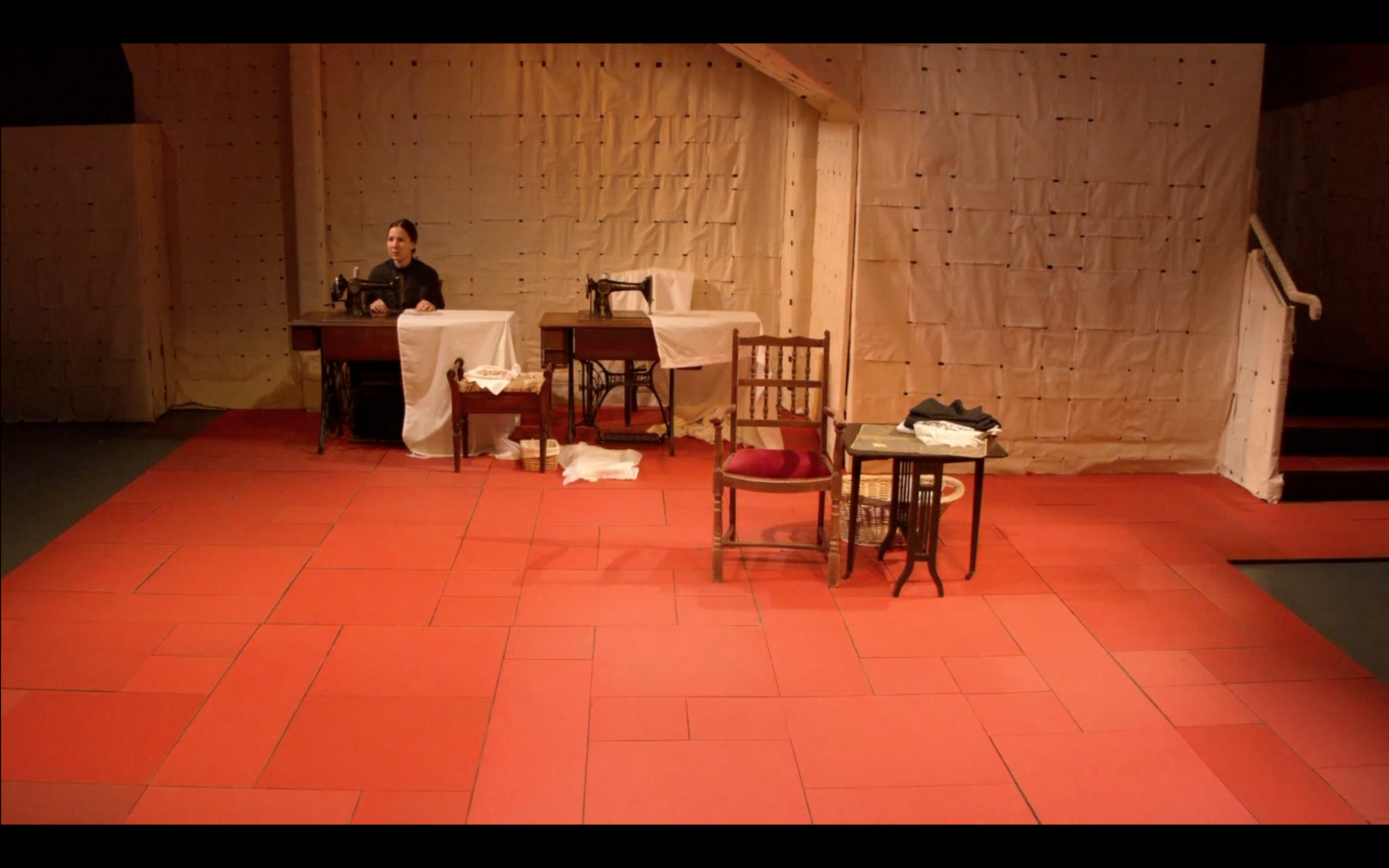 Bernarda: Enjoying this silence, and unable to find any trace of that 'monstrous thing' you claim is happening here.

Bernarda: In this house there is no question of 'yes' or 'no'. My vigilance takes care of that.

La Poncia: Nothing is happening on the surface, it's true. Your daughters are tucked away in a cupboard, and that's how they live. But neither you nor anyone else can see into their hearts.

La Poncia: You care about that because you're their mother. For me, looking after your house is enough.

La Poncia: I know my place, and I'm at peace.

Bernarda: The trouble is, you have nothing to talk about. If there were grass growing in this house, you'd bring every sheep in the neighbourhood in to graze.

La Poncia: I cover up more than you think.

Bernarda: Does your son still see Pepe at four o'clock in the morning? Do they still tell the same malicious stories about this house?    '

La Poncia: They say nothing.

Bernarda: Because they can't! Because there's no meat to bite into. Thanks to my watchful eyes. Bernarda: (Levantándose.) No, nada. Me voy a la cama.

La Poncia: Bernarda - I don't want to talk, because I'm afraid of what you'll do. But don't be too sure.

Bernarda: Nothing is happening here! I'm quite prepared to deal with your suppositions.

La Poncia: Well, all the better for you!

Bernarda: All the better!

Maid (entering): I have finished washing the dishes now. Is there anything else you want, Bernarda?

Bernarda (getting up): Nothing. I'm going to bed.

Maid: What time do you want me to call you?

La Poncia: When you can't fight the tide, it's easier to turn your back, so you don't see it.

Maid: She's so proud she puts a blindfold on herself.

La Poncia: There's nothing I can do. I tried to put a stop to all this, but now it frightens me too much. Do you hear this silence? Well, there's a storm brewing in every room. The day it bursts, we'll all be swept away! I've said what I had to say.

Maid: Bernarda thinks that no one can stand up to her. She doesn't realize the power a man can have over lonely women.

La Poncia: It's not all Pepe el Romano's fault. It's true that last year he was after Adela, and she was crazy for him. But she should have known her place and not led him on. A man is a man.

Maid: They say he spoke to Adela many times.

La Poncia: It's true. (Lowering her voice) And other things.

La Poncia: I'd like to cross the ocean and get away from this house of turmoil.

Maid: Bernarda is rushing the wedding day, and perhaps nothing will happen.

La Poncia: Things have already gone too far. Adela has made up her mind to do whatever it takes, and the others keep watch, all the time.

La Poncia: She's the worst! She's a well of poison! She knows el Romano is not for her, and she would crush the world if it were in her hand.

Maid: They are wicked.

La Poncia: They are women without men, that's all. When it comes to that, you even forget your own blood. Sssssssh! (She listens.)

Maid: What is it?

La Poncia (stands up): The dogs are barking.

Maid: Someone must have walked past the front door.

Adela: I'm getting a drink of water. (She drinks from a glass on the table.)

La Poncia: I thought you were asleep.

Adela: I woke up thirsty. And what about you, aren't you going to get some rest?

Maid: We've earned our sleep. Bernarda doesn't give me a moment's rest the whole day.

La Poncia: Take the lamp with you.

La Poncia: They're not going to let us sleep.

(They exit. The stage is almost dark. Maria Josefa enters, carrying a baby “ewe'' in her arms.) 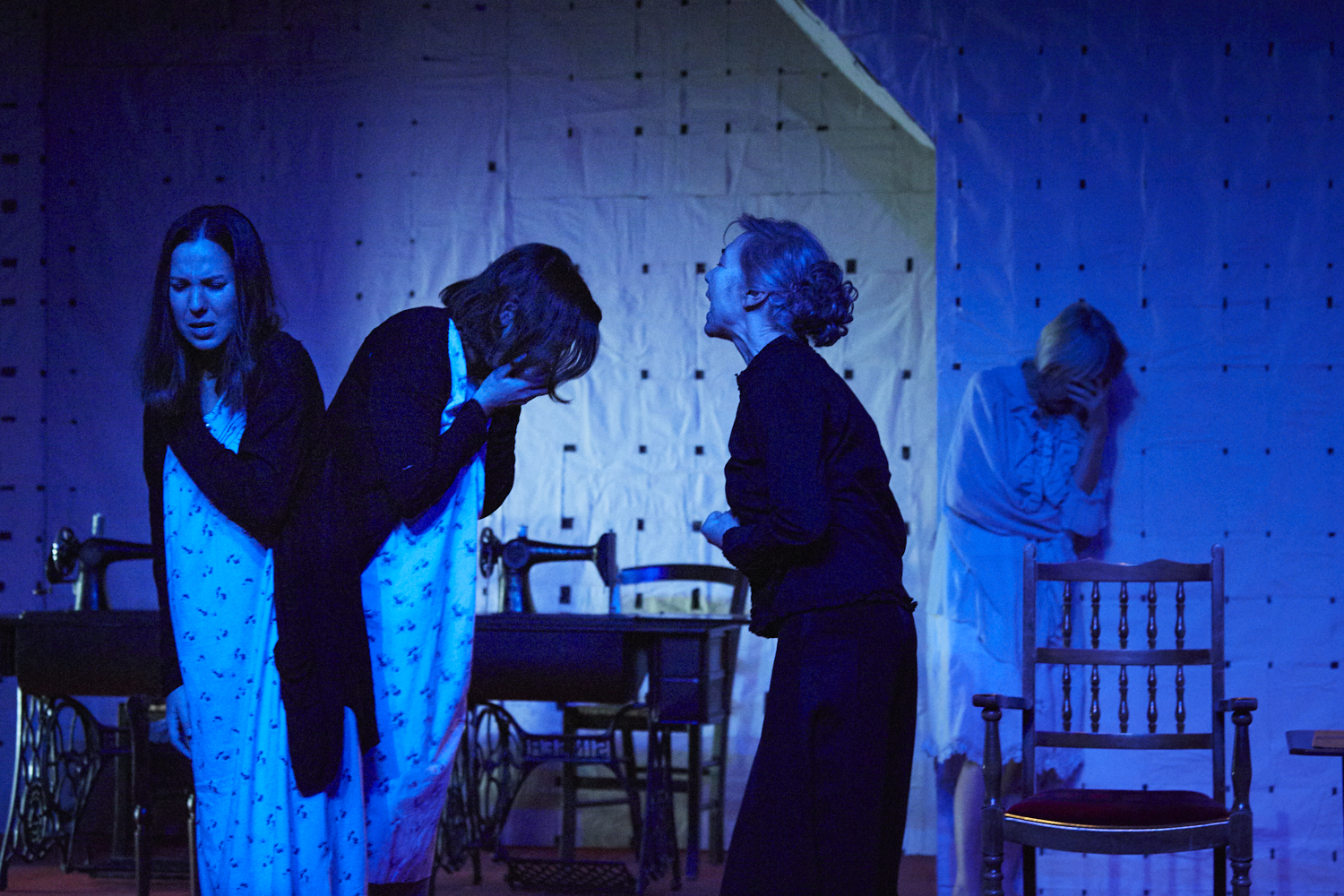