Magdalena: (A voces.) Adela, ¿no vienes?

Magdalena: ¡A lo mejor no sales!

Martirio: It's for Amelia.

Magdalena: Angustias, shall I sew Pepe's initials on it too?

Amelia: She must be lying on her bed.

La Poncia: Something's wrong with that girl. She seems restless, shaky, frightened, as if she had a lizard on her chest!

Martirio: She has neither more not less than what we all have.

Magdalena: All of us except Angustias.

Angustias: I feel just fine. And whoever doesn't like it, can lump it.

Magdalena: Of course, one must admit that one of your best points is your figure and your tact.

Angustias: Fortunately, I'm soon going to get out of this hell.

Magdalena: Perhaps you won't be getting out!

Angustias: And besides, gold in your purse is worth more than dark eyes in your face.

Magdalena: In one ear and out the other.

Amelia: (To la Poncia) Poncia, open the door to the patio to see if we can get a little fresh air in.

Martirio: Last night I couldn't get to sleep for the heat. 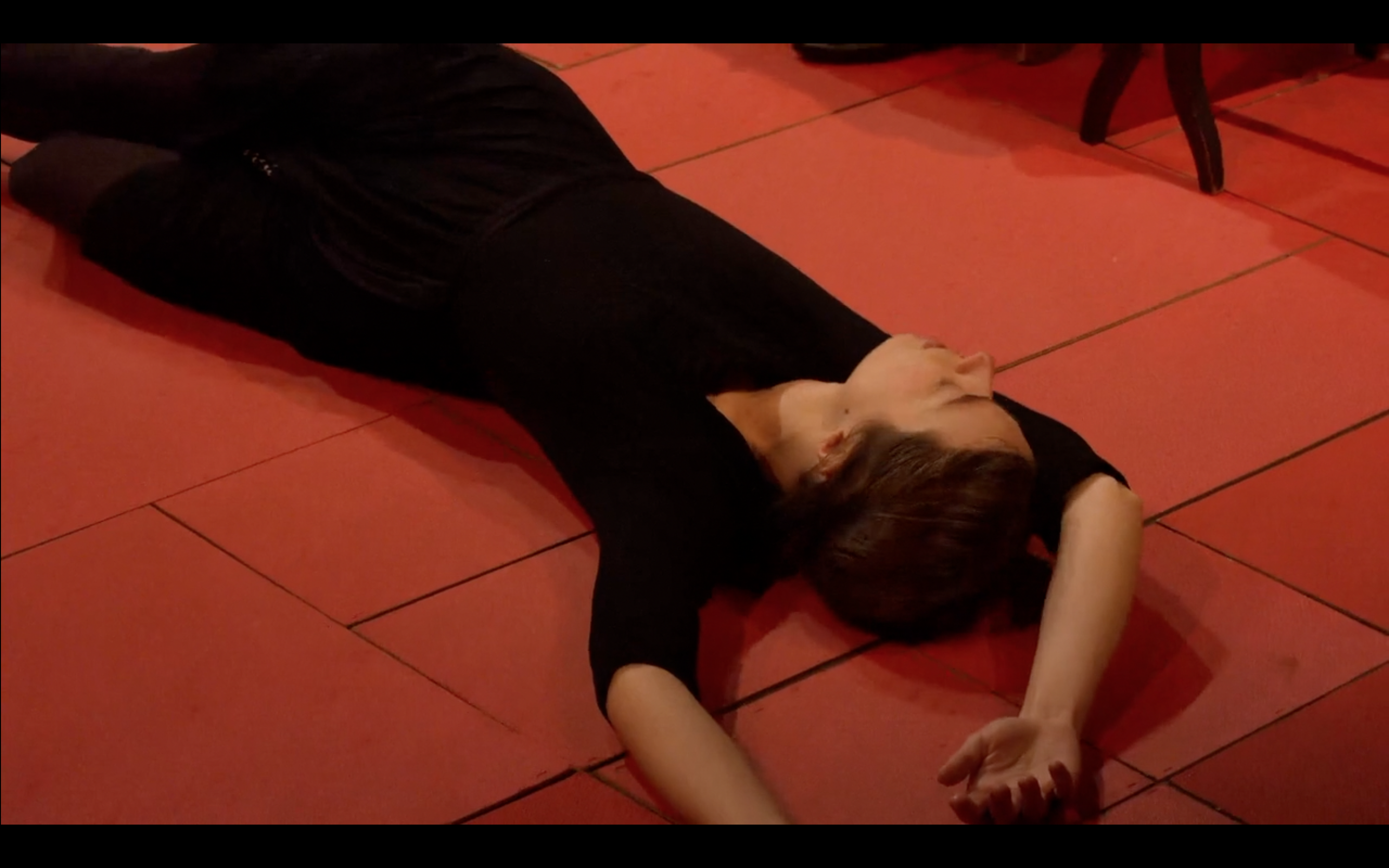 Amelia: A mí también me pareció...

Angustias: Pues a mí no me chocó.

Amelia: A mí me daría no sé qué.

Amelia: Neither could I.

Magdalena: I got up to cool off. There was a black storm cloud and even a few drops of rain fell.

La Poncia: It was one o'clock in the morning and it was like fire rising from the ground! I got up too. Angustias was still at her window talking with Pepe.

Magdalena: (With irony) So late? What time did he leave?

Angustias: Magdalena, why ask if you saw him?

Amelia: He must have left around half past one.

Angustias: Yes? How do you know?

Amelia: I heard him cough, and I heard his pony stamping his hooves.

La Poncia: But I heard him leave at around four.

Angustias: That couldn't have been him.

Amelia: I thought so too.

La Poncia: Tell me, Angustias what did he say to you, the first time he came to your window?

Angustias: Nothing. What was he going to say to me? Just talk.

Martirio: It really is strange how two people who have never met suddenly see each other in a grate and then they're engaged!

Angustias: Well, it didn't bother me.

Angustias: No, because when a man approaches a grate already knows from those who come and go, who fetch and carry, that the answer will be yes.

Martirio: Yes. But he must have asked!

Amelia: (Curious.) And how did he say it to you?

Angustias: Well: "You already know I'm interested, I need a good woman, well-behaved, and that's you if you agree."

Amelia: These things embarrass me!

Angustias: And me, but you have to get through them!

La Poncia: Did he say any more?

Angustias: Yes, he did all the talking.

Martirio: What about you?

Angustias: I couldn't have. My heart almost jumped out of my mouth! It was the first time I was alone with a man at night.

Magdalena: And such a good-looking man!

La Poncia: Such things are easy for people with a little experience, who talk and say things and wave their hands around... The first time my husband, Evaristo the Goldfinch came to my window...

La Poncia: It was very dark. I saw him coming closer and when he arrived, he said to me: "Good evening." "Good evening," I said, and we stayed silent for more than half an hour. Our whole bodies were sweating. Then Evaristo came closer, and closer, as though he wanted to squeeze through the bars, and he said in a very low voice: "Come here, so I can feel you!" 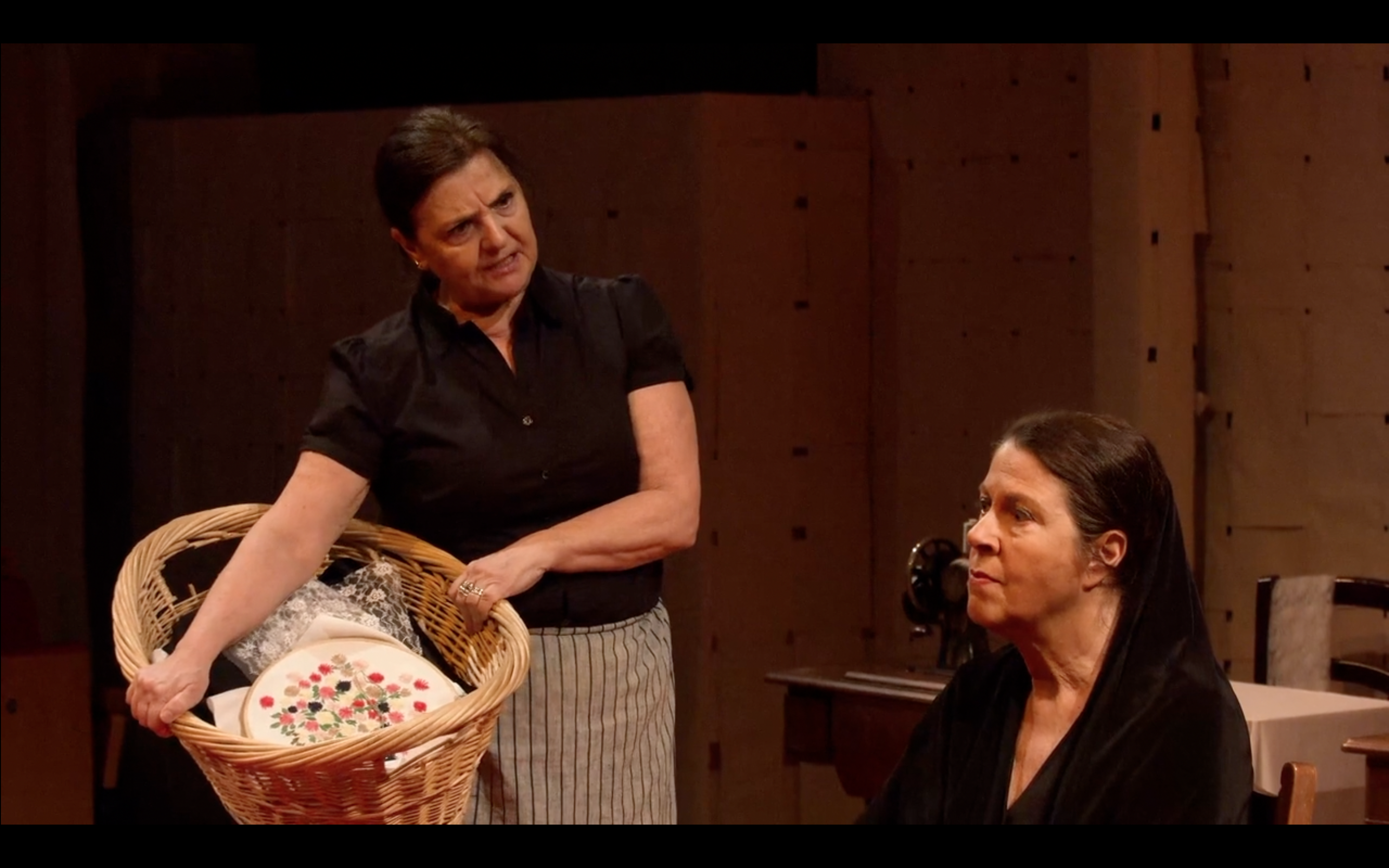 (Everyone laughs. Amelia gets up hurriedly and looks out a door)

Magdalena: She would have set us straight! (They continue laughing)

La Poncia: Afterwards, he behaved himself. Instead of doing something else he took up breeding finches - until he died. Anyway, for you single women, you should know that fifteen days after the wedding a man leaves the bed for the table, then later the table for the tavern. And she who doesn't accept it rots away crying in a corner!

Amelia: You went along with it.

La Poncia: I could handle him!

Martirio: Is it true that you hit him, sometimes?

La Poncia: Yes, and I almost put his eye out.

Magdalena: That's how all women must be!

La Poncia: I'm from your mother's school. One day, I'm not sure what he said to me but I killed all his finches with the mortar (They Laugh).

La Poncia: That child is ill!

Martirio: Of course. She hardly sleeps!

La Poncia: What does she do then?

Martirio: How do I know what she does!

La Poncia: You know better than me, only a wall separates your sleep.

Angustias: Envy is eating her up.

Angustias: It's true. You can see it in her eyes. She's starting to look a little mad.

Martirio: Don't talk about madness in this house! Its the only word you mustn't say.

Adela: Leave me alone! Asleep or awake, it's none of your business! I'll do what I want with my body!

Martirio: I'm just worried for you!

Adela: Worry? Or curiosity? Weren't you all sewing? Well, continue! If only I were invisible, so I could walk through these rooms without being asked where I am going!

Maid: (Enters) Bernarda is calling you. The man who sells lace is here.

Magdalena: The lace! (They exit)

(As they leave, Martirio stares at Adela)

Adela: Don't look at me any more! If you want, I'll give you my eyes - they are brighter and my back, to fix that crooked one you have. But turn your head away when I pass.

La Poncia: Adela! she is your sister, and the one who loves you the most! 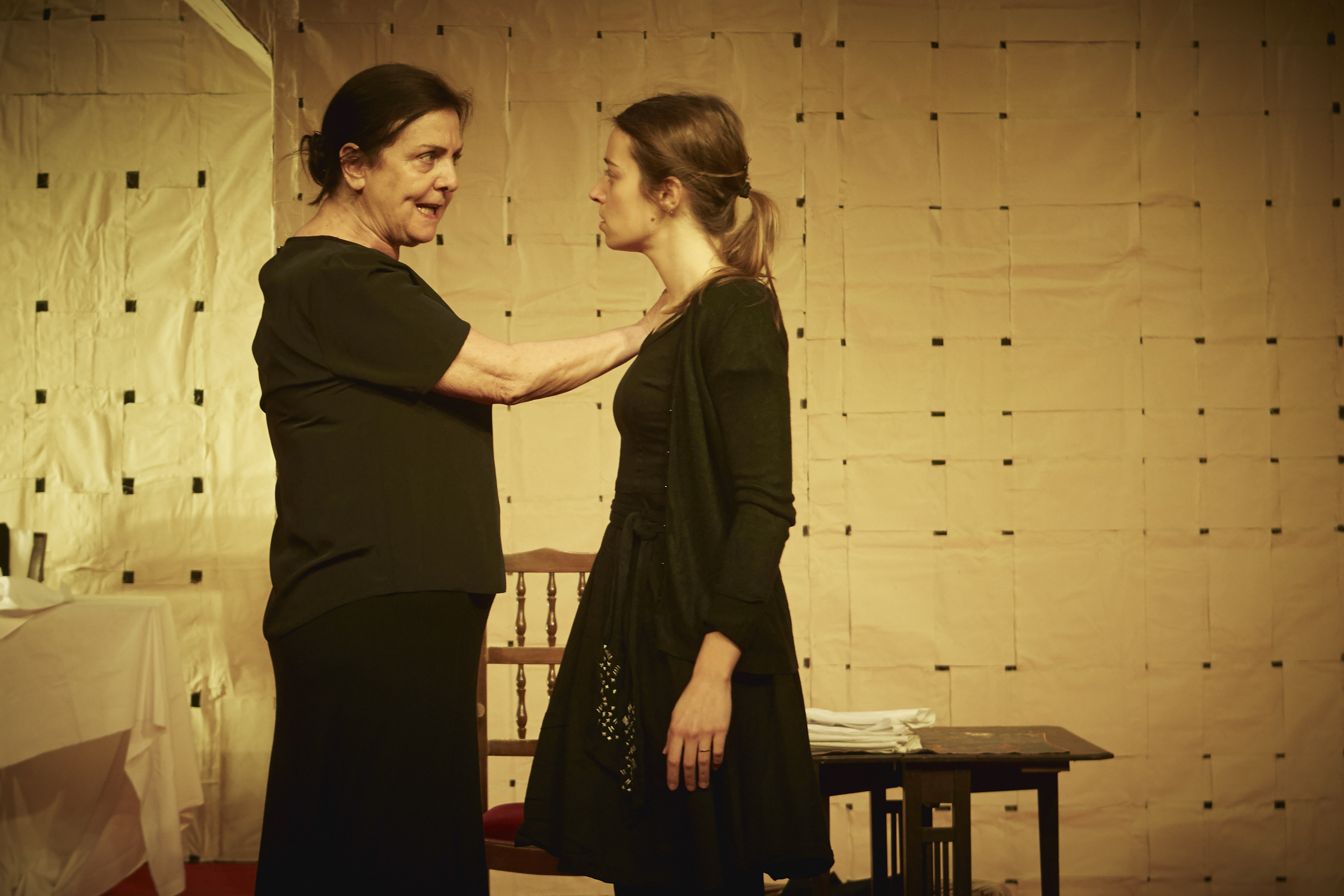