Bernarda: (To the maid) Silence! 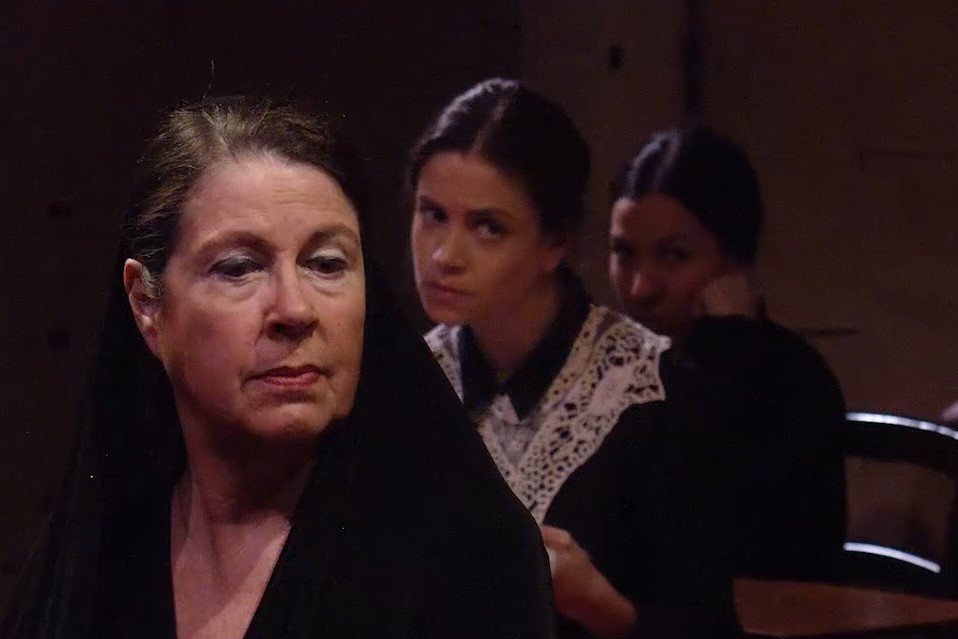 Bernarda: Less screaming and more work! You should have seen to it everything was cleaner to receive the mourners. Get out! This is not where you belong. (the Maid leaves, weeping.) The poor are like animals; they seem to be made of other substances. Magdalena don't cry! If you want to cry, crawl under the bed. Did you hear me? Is the lemonade ready?

La Poncia (she enters with a large tray full of small white cups, which she passes around.): Yes, Bernarda.

Bernarda: Give some to the men.

La Poncia: They're having some on the patio.

Bernarda: Have them leave the way they came in. I don't want them coming through here.

Bernarda: His mother was there. She saw his mother. Neither she nor I saw Pepe.

Maritirio: I thought I saw him…

Bernarda: In church, women should look at no man but the priest, and at him only because he's wearing skirts. Whoever turns her head is on the prowl for a man. (striking the floor with her cane): Blessed be God!

All (crossing themselves): Forever blessed and holy.

Rest in peace, with the Heavenly Host watching over you.

With Saint Michael the archangel

And his sword of justice

With the key that opens all

And the hand that closes all

With all the blessed saints

And the little lights of the fields

With our holy charity

And the souls from land and sea

Bernarda: Grant repose to your servant Antonio María Benavides and give him the crown of your sacred glory.

Bernarda (getting to her feet and singing): Requiem aeternam dona eis, Domine.

All (standing and singing in the Gregorian mode): Et lux per ­ petua luceat eis.

La Poncia (entering with a money bag): The men left this bag of money for prayers.

Bernarda: Thank them and pour them a glass of brandy.

Bernarda (to Magdalena, who is starting to cry): Sssh! (She bangs her cane). (To the guests, who have all left) Go home and criticize everything you've seen! I hope many years go by before you cross my threshold again!

La Poncia: You have nothing to complain about. The whole town came! 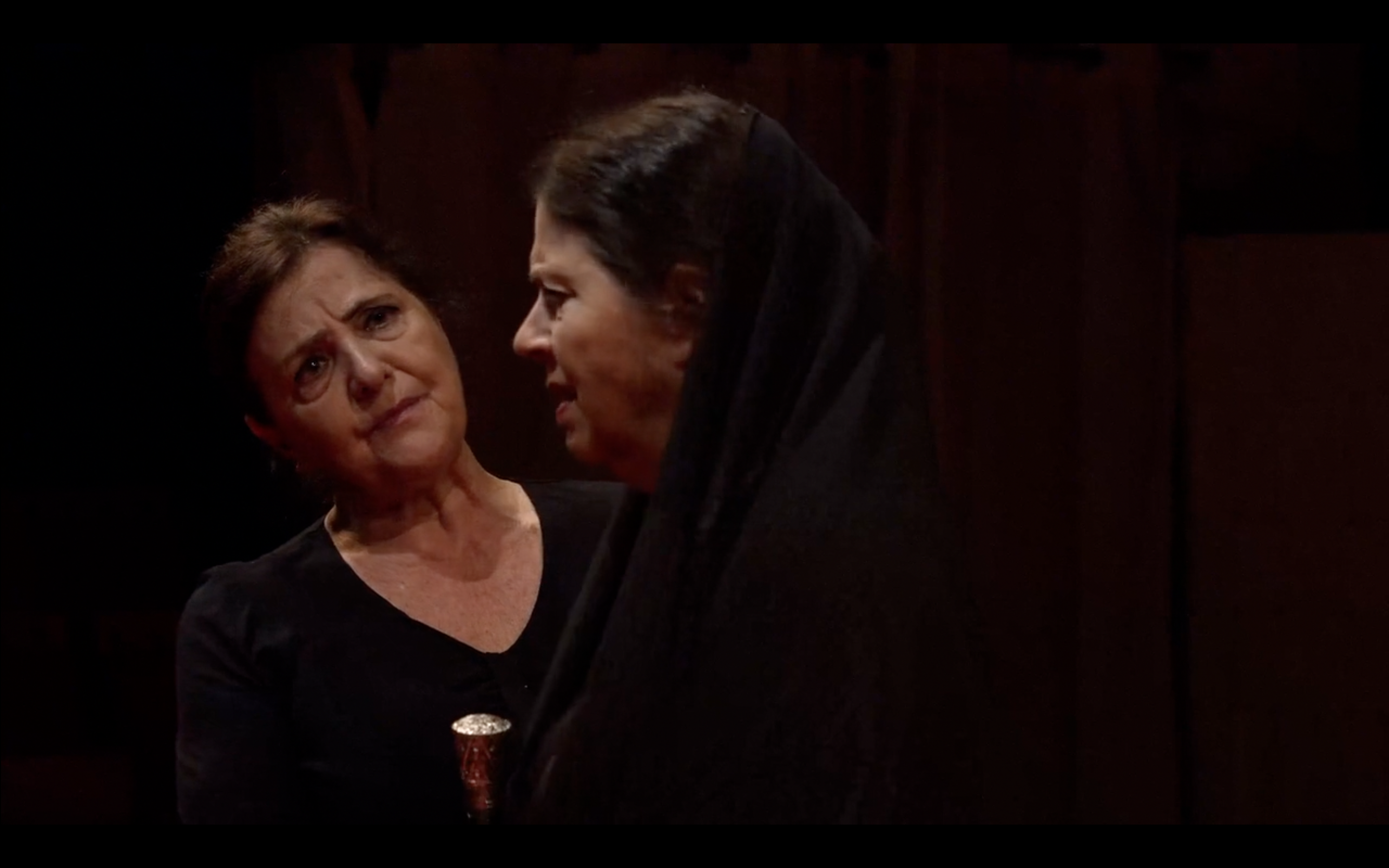 Bernarda: Yes - to fill my house with their sweaty underclothes and poisoned tongues!

Bernarda: That's the way you must talk in this damned town without a river, this town of wells! Where you always drink the water fearing that it's poisoned!

La Poncia: Look what they've done to the floor!

Bernarda:  You would think a herd of goats had walked on it! (La Poncia scrubs the floor.) Adela, give me a fan.

Adela: Here you are. (She gives her a round fan decorated with red and green flowers.)

Bernarda (hurling the fan to the floor): Is this the fan you give to a widow? Give me a black one and learn to respect your father's memory! Martirio: Yo no tengo calor.

Bernarda: What about you?

Bernarda: Well, look for another - you're going to need one. During our eight years of mourning, no wind from the street will enter this house! Pretend we have sealed up the doors and windows with bricks. That was how it was in my father's house, and in my grandfather's house. In the meantime, you can begin to embroider your trousseaus. I have twenty bolts of linen in the chest from which you can cut sheets. Magdalena an embroider them. 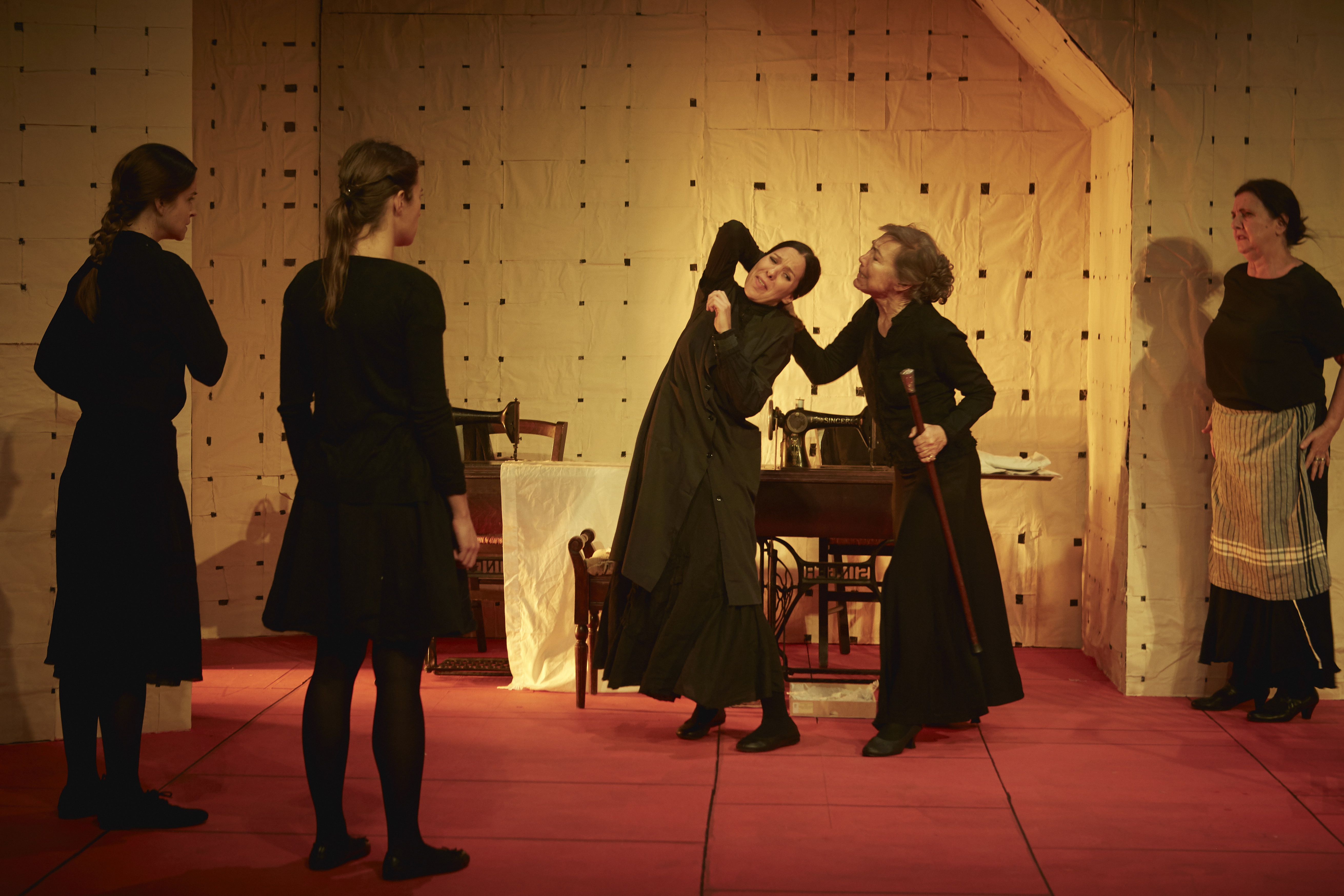 Magdalena: It's all the same to me. 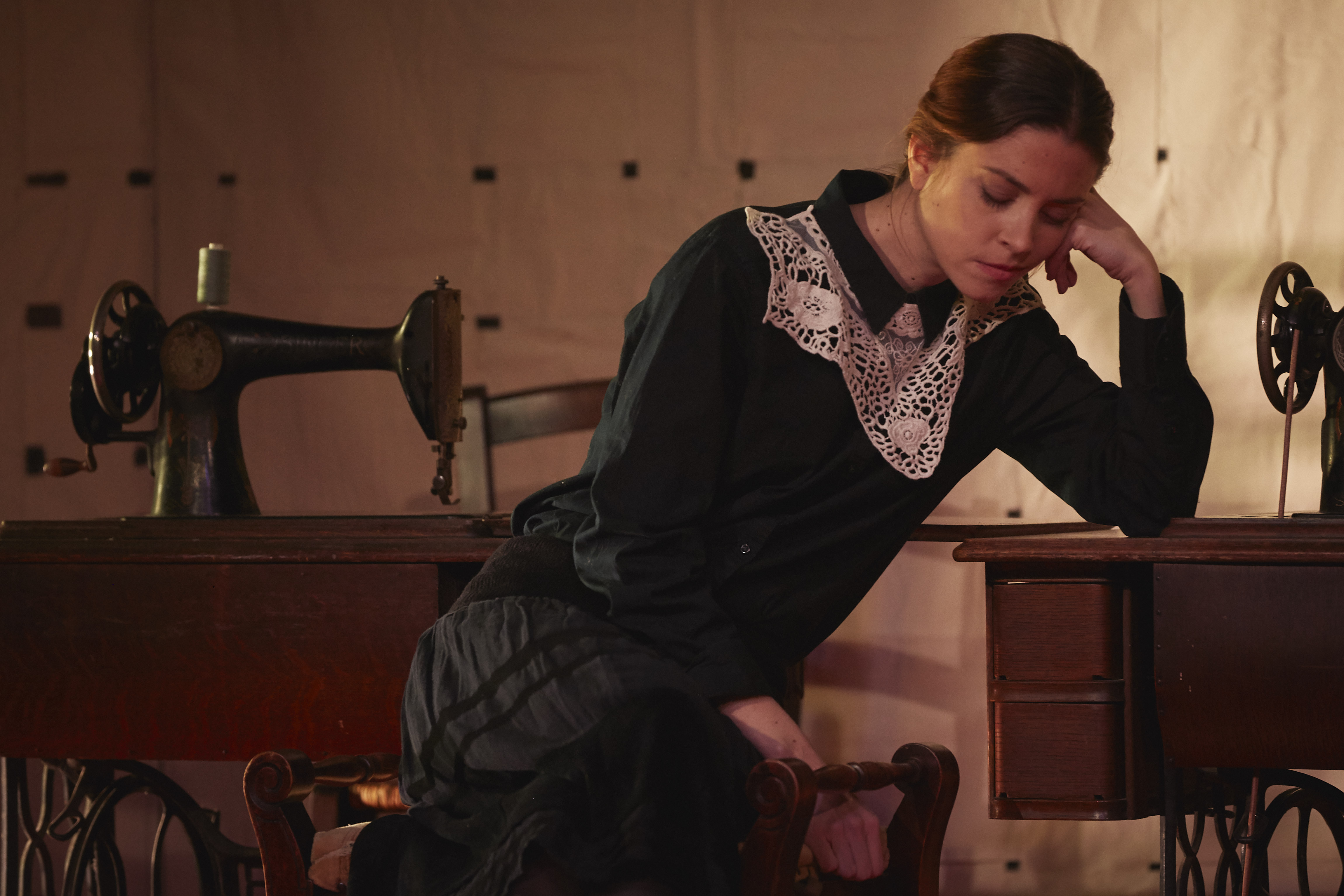 Adela (acidly):  If you don't want to embroider them, they'll go without embroidering. That way yours will stand out!

Magdalena: Neither mine nor yours. I know I'm not going to get married. I'd rather carry sacks to the mill. Anything but sit in this dark room, day after day! 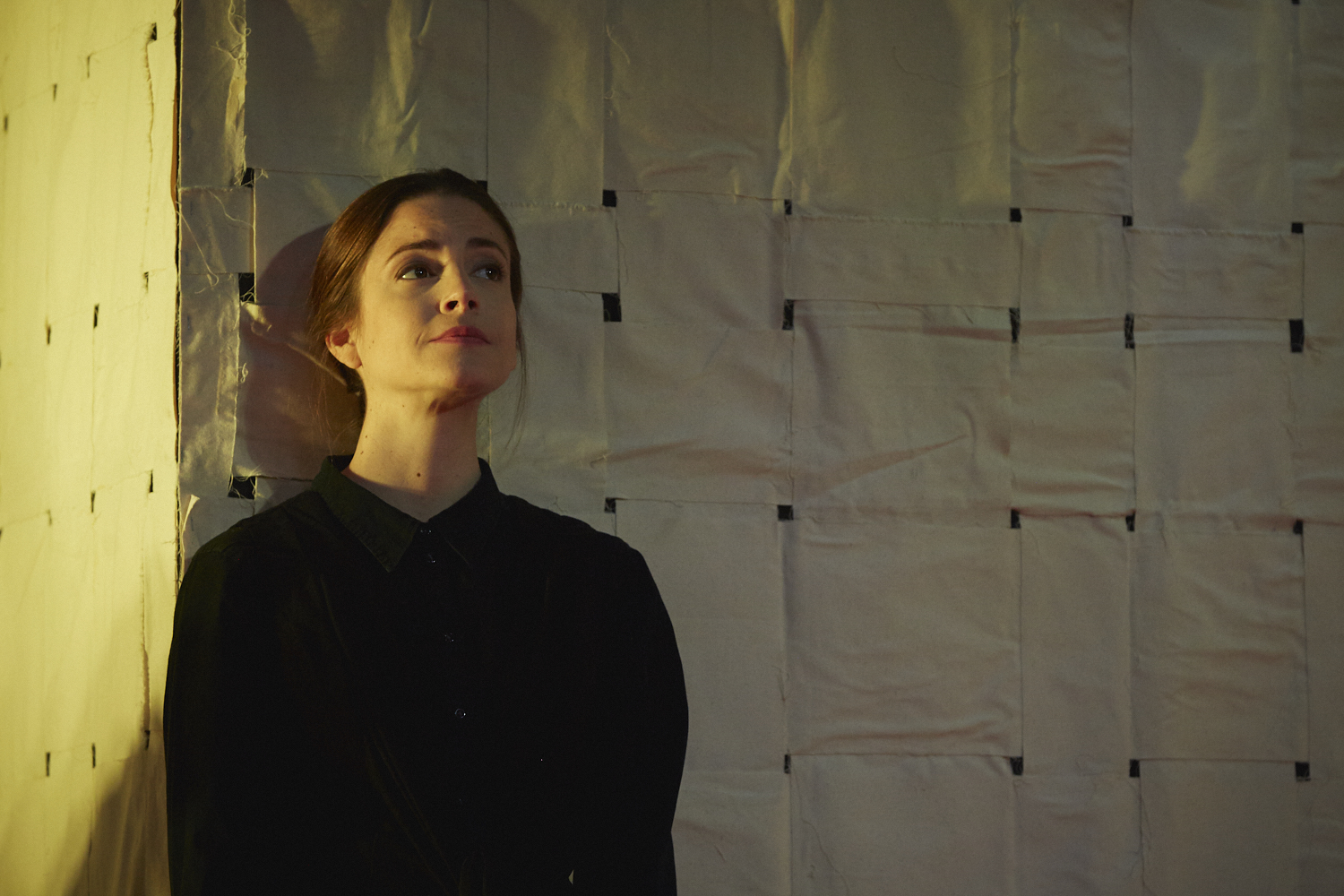 Bernarda:  That's what it means to be a woman.

Magdalena:  To hell with being a woman!

Bernarda: Here you do what I tell you to do! You can't run to your father with your stories anymore. A needle and thread for females: a mule and a whip for males. That's how it is for people born with means.

Voice: Bernarda! Let me out!

Bernarda (in a loud voice):  Let her out now! (The Maid enters.)

Maid: I could hardly hold her. Your mother is as strong as an oak.

Bernarda: She takes after my grandfather. He was just the same.

Maid: Several times during the funeral I had to cover her mouth with an empty sack because she wanted to call out to you, to give her at least some dishwater to drink, and dog meat. That's what she says you give her.

Martirio: She's up to no good.

Bernarda (to the Maid): Go with her and be sure she doesn't go near the well.

Maid: She took her rings and the amethyst earrings out of her trunk. She put them on and told me she wants to get married.

Bernarda: She can let off steam out in the patio. And be sure she doesn't go near the well.

Maid: Don't worry, she won't throw herself in!

Bernarda: It's not that - out there, the neighbours can see her from their windows.

Bernarda:  Very well, but don't take the kerchief off your head. (Adela enters.) Where is Angustias?

Adela (pointedly): I saw her peering through a crack in the front door. The men had just left.

Bernarda: And you, why did you go to the door, too?

Adela: I went to see if the hens had laid.

Bernarda: But the men must have already left.

Adela (intentionally): A group of them were still standing around outside.

Angustias (as she enters): What do you want?

Bernarda: What were you looking at? And who?

Bernarda:  Is it proper for a woman of your class to go chasing after a man on the day of her father's funeral mass? Answer me! Who were you looking at?

Bernarda (advancing on her with her cane): You weakling!
You're sickening! (She hits Angustias.)

La Poncia (running to her): Bernarda, calm down!
(She holds on to her. Angustias is crying.)

Bernarda:  Get out of here! All of you!
(They all leave, except Bernarda and Poncia.)

La Poncia: She did it without thinking what she was doing - which was clearly wrong. It seemed strange to me to see her sneaking off towards the patio. And then she stood at the window, listening to the men's conversation - which, as always, was not fit to hear.

Bernarda: That's why they come to funerals. (With curiosity) What were they talking about?

La Poncia: They were talking about Paca la Roseta. Last night they tied her husband up in a stall, threw her over the back of a horse, and carried her off to the top of the olive grove.

Bernarda: What about her?

La Poncia: Her? She agreed to it. They say she rode topless, and Maximiliano held her as if he were playing a guitar. How horrible!

Bernarda: Then what happened?

La Poncia: What was bound to happen. It was dawn when they got back. Paca la Roseta had her hair undone and was wearing a crown of flowers on her head.

Bernarda: She's the only loose woman we have in this town.

La Poncia: Because she's not from here. She's from far away. And the men who went with her are the sons of strangers, too. The men around here wouldn't dare do that.

Bernarda: No. But they like to watch it and talk about it and lick their fingers over what goes on.

Bernarda (glancing from side to side with a certain fear): What? 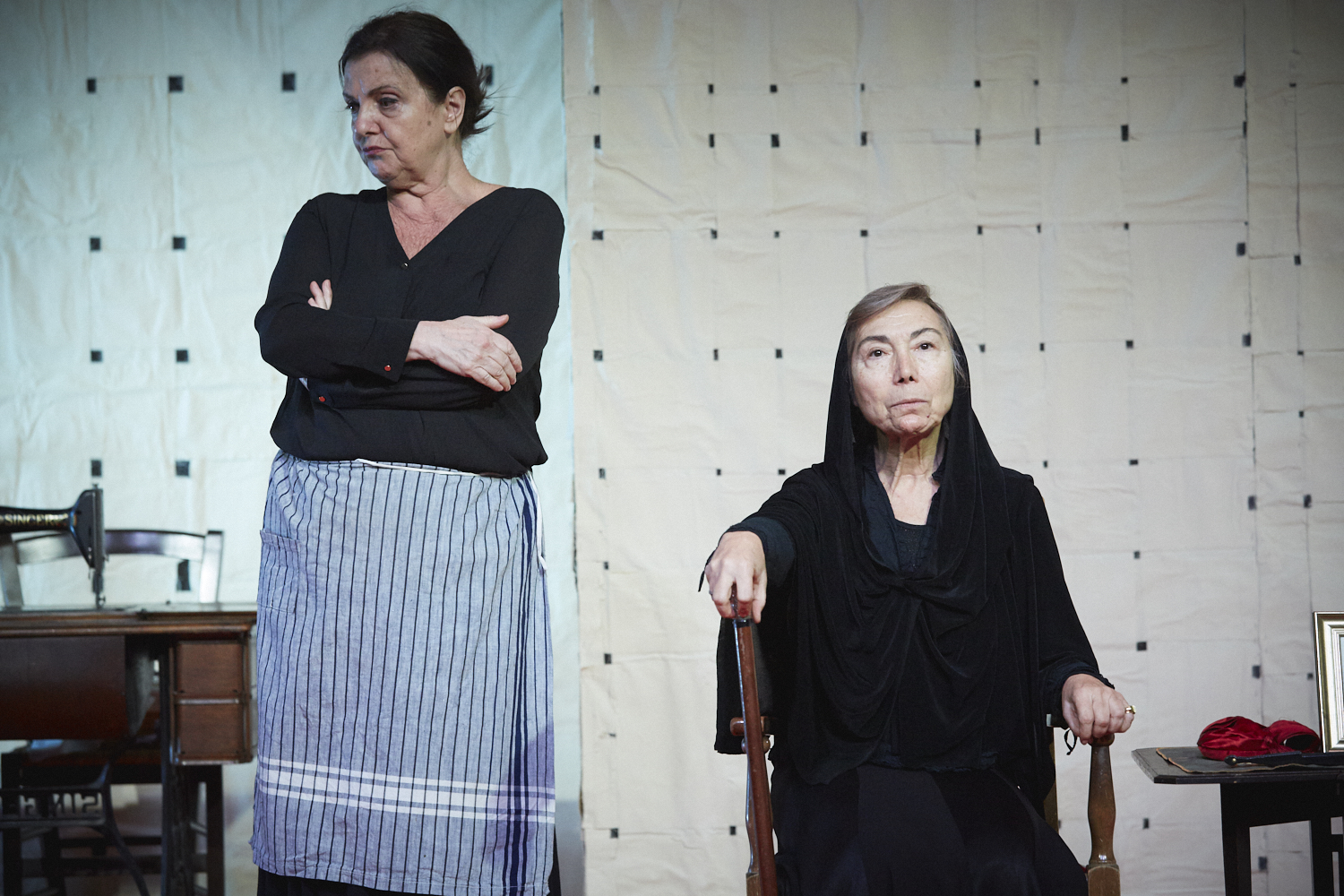 La Poncia: No he querido ofenderte.

Bernarda: And my daughter heard?

Bernarda: That one takes after her aunts. Soft and slippery - making sheep's eyes at any little barber who flattered them! How one must suffer and struggle to get people to behave decently and not like savages!

La Poncia: Your daughters are old enough to get married now. They give you little enough trouble. Angustias must be well over thirty by now.

Bernarda: Thirty-nine, to be exact.

La Poncia: Imagine! And she's never had a suitor.

Bernarda (furious): None of them has had a suitor - or needs one! They can get by very well.

La Poncia: I didn't mean to offend you.

Bernarda:  For a hundred miles around, no one can measure up to them.  The men here are not of their class. What would you have me do - turn them over to some field hand?

La Poncia: You should have gone to some other town.

Bernarda: Of course - to sell them!

they would be the poor ones.

La Poncia: No one can talk to you. Can we or can we not be honest with each other?

Bernarda:  We can not. You are my servant, and I pay you. Nothing more!

Maid (entering): Don Arturo is here. He's come to discuss the will.

Bernarda: Get busy!  (To the Maid) You start scrubbing the patio. (To Poncia) And you start putting away all the clothes of the deceased in the big chest.

La Poncia: We could give some things away.

Bernarda: Nothing, not even the handkerchief we used to cover his face!

(Bernarda leaves slowly, leaning on her cane, with a final look at the servants. Then the Maid exit. Amelia and Martirio enter.)

Adela: Have you taken your medicine?

Martirio: For all the good it's going to do me!